When looking into someone’s eyes, we can easily see several structures: 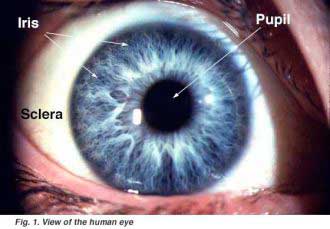 A black-looking aperture, the pupil, that allows light to enter the eye (it appears dark because of the absorbing pigments in the retina) (Fig. 1).

When we remove the eye from the orbit, we can see that the eye is a slightly asymmetrical sphere with an approximate sagittal diameter or length of 24 to 25 mm. and a transverse diameter of 24 mm. It has a volume of about 6.5 cc 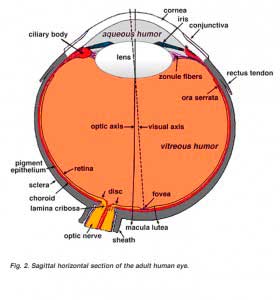 A cross-sectional view of the eye (Fig. 2) shows:

Light rays are focussed through the transparent cornea and lens upon the retina. The central point for image focus (the visual axis) in the human retina is the fovea. Here a maximally focussed image initiates resolution of the finest detail and direct transmission of that detail to the brain for the higher operations needed for perception. Slightly more nasally than the visual axis is the optic axis projecting closer to the optic nerve head. The optic axis is the longest sagittal distance between the front or vertex of the corna and the furthest posterior part of the eyeball. It is about the optic axis that the eye is rotated by the eye muscles. Some vertebrate retinas have instead of a fovea, another specialization of the central retina, known as an area centralis or a visual streak. 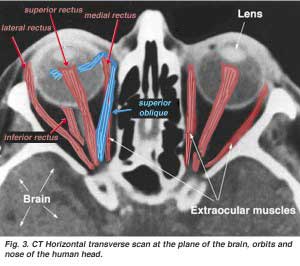 Each eyeball is held in position in the orbital cavity by various ligaments, muscles and fascial expansions that surround it (see Fig. 3).

Inserted into the sclera are three pairs of muscles (6 muscles altogether). Two pairs are rectus muscles running straight to the bony orbit of the skull orthogonal to each other (the superior rectus, the inferior rectus, the lateral rectus and the medial rectus muscles). A further pair of muscles, the oblique muscles (superior oblique and inferior oblique) are angled as the name implies obliquely. These muscles, named extraocular muscles rotate the eyeball in the orbits and allow the image to be focussed at all times on the fovea of central retina.

2.Development of the eye

The retina is a part of the central nervous system and an ideal region of the vertebrate brain to study, because like other regions of the central nervous system, it derives from the neural tube. The retina is formed during development of the embryo from optic vesicles outpouching from two sides of the developing neural tube. The primordial optic vesicles fold back in upon themselves to form the optic cup with the inside of the cup becoming the retina and the outside remaining a single monolayer of epithelium known as the retinal pigment epithelium (Fig, 4, 3). Initially both walls of the optic cup are one cell thick, but the cells of the inner wall divide to form a neuroepithelial layer many cells thick: the retina

Sensory retinal development begins as early as the optic vesicle stage, with the migration of cell nuclei to the inner surface of the sensory retina. Additional retinal development is characterized by the formation of further layers arising from cell division and subsequent cell migration. The retina develops in an inside to outside manner: ganglion cells are formed first and photoreceptors cells become fully mature last. 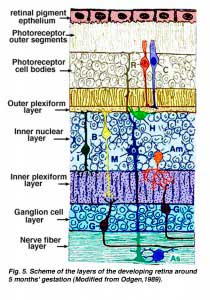 Further changes in retinal morphology are accomplished by simultaneous formation of multiple complex intercellular connections. Thus by 5 months of gestation (Fig. 5) most of the basic neural connections of the retina have been established (Mann, 1964).

The functional synapses are made almost exclusively in the two plexiform layers and the perikarya of the nerve cells are distributed in the three nuclear layers.

Photoreceptor cell maturation begins with the formation of outer segments (OS) containing visual pigment from multiple infoldings of the plasma membrane of each cell. Outer segment formation proceeds, and the eye becomes sensitive to light at about 7 months’ gestation.

The final portion of the sensory retina to mature is the fovea, where the ganglion cell layer thickening begins during midgestation. The outer nuclear layer is also wider here than elsewhere in the retina and consists almost entirely of developing cone cells. The ganglion cell nuclei migrate radially outwards in a circle, leaving the fovea free of ganglion cell nuclei. Cell-cell attachments persist, however and foveal cone cells alter their shape to accomodate the movement of ganglion cells. Foveal development continues with cell rearrangements and alteration in cone shape until about 4 years after birth (Hendrickson and Yondelis, 1984; Curcio and Hendrickson, 1991).

Surface membranes cover the eye cup and develop into lens, iris and cornea with the three chambers of fluid filled with aqueous and vitreous humors (Fig. 6).

In following chapters, we will describe in greater detail the individual nerve cells that make up the retina and the functional pathways into which these neurons are organized. Eventually, we will progress to a stage where we can appreciate the summary diagrams below (Figs. 7 and 8) that show the functional wiring of two well-understood mammalian retinas, namely cat and primate retinas.