When an ophthalmologist uses an ophthalmoscope to look into your eye he sees the following view of the retina (Fig. 1). 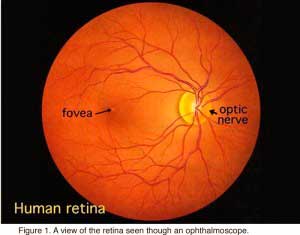 A circular field of approximately 6 mm around the fovea is considered the central retina while beyond this is peripheral retina stretching to the ora serrata, 21 mm from the center of the retina (fovea). The total retina is a circular disc of between 30 and 40 mm diameter. (Polyak, 1941; Van Buren, 1963; Kolb, 1991). 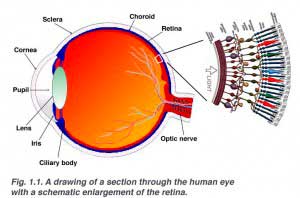 The retina is approximately 0.5 mm thick and lines the back of the eye. The optic nerve contains the ganglion cell axons running to the brain and, additionally, incoming blood vessels that open into the retina to vascularize the retinal layers and neurons (Fig. 1.1). A radial section of a portion of the retina reveals that the ganglion cells (the output neurons of the retina) lie innermost in the retina closest to the lens and front of the eye, and the photosensors (the rods and cones) lie outermost in the retina against the pigment epithelium and choroid. Light must, therefore, travel through the thickness of the retina before striking and activating the rods and cones (Fig. 1.1). Subsequently the absorbtion of photons by the visual pigment of the photoreceptors is translated into first a biochemical message and then an electrical message that can stimulate all the succeeding neurons of the retina. The retinal message concerning the photic input and some preliminary organization of the visual image into several forms of sensation are transmitted to the brain from the spiking discharge pattern of the ganglion cells.

A simplistic wiring diagram of the retina emphasizes only the sensory photoreceptors and the ganglion cells with a few interneurons connecting the two cell types such as seen in Figure 2. 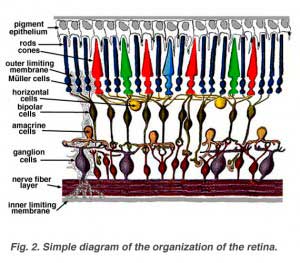 When an anatomist takes a vertical section of the retina and processes it for microscopic examination it becomes obvious that the retina is much more complex and contains many more nerve cell types than the simplistic scheme (above) had indicated. It is immediately obvious that there are many interneurons packed into the central part of the section of retina intervening between the photoreceptors and the ganglion cells (Fig 3).

The first area of neuropil is the outer plexiform layer (OPL) where connections between rod and cones, and vertically running bipolar cells and horizontally oriented horizontal cells occur (Figs. 5 and 6).[/vc_column_text]

The second neuropil of the retina, is the inner plexiform layer (IPL), and it functions as a relay station for the vertical-information-carrying nerve cells, the bipolar cells, to connect to ganglion cells (Figs. 7 and 8). In addition, different varieties of horizontally- and vertically-directed amacrine cells, somehow interact in further networks to influence and integrate the ganglion cell signals. It is at the culmination of all this neural processing in the inner plexiform layer that the message concerning the visual image is transmitted to the brain along the optic nerve.

•The inner nuclear layer (INL) is thicker in the central area of the retina compared with peripheral retina, due to a greater density of cone-connecting second-order neurons (cone bipolar cells) and smaller-field and more closely-spaced horizontal cells and amacrine cells concerned with the cone pathways (Fig. 9). As we shall see later, cone-connected circuits of neurons are less convergent in that fewer cones impinge on second order neurons, than rods do in rod-connected pathways.

The OLM forms a barrier between the subretinal space, into which the inner and outer segments of the photoreceptors project to be in close association with the pigment epithelial layer behind the retina, and the neural retina proper. The ILM is the inner surface of the retina bordering the vitreous humor and thereby forming a diffusion barrier between neural retina and vitreous humor (Fig. 11). 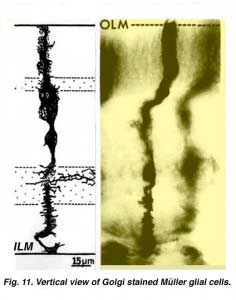 Throughout the retina the major blood vessels of the retinal vasculature supply the capillaries that run into the neural tissue. Capillaries are found running through all parts of the retina from the nerve fibre layer to the outer plexiform layer and even occasionally as high as in the outer nuclear layer. Nutrients from the vasculature of the choriocapillaris (cc) behind the pigment epithelium layer supply the delicate photoreceptor layer.

The center of the fovea is known as the foveal pit (Polyak, 1941) and is a highly specialized region of the retina different again from central and peripheral retina we have considered so far. Radial sections of this small circular region of retina measuring less than a quarter of a millimeter (200 microns) across is shown below for human (Fig. 12a) and for monkey (Fig.12b).

The fovea lies in the middle of the macula area of the retina to the temporal side of the optic nerve head (Fig. 13a, A, B). It is an area where cone photoreceptors are concentrated at maximum density, with exclusion of the rods, and arranged at their most efficient packing density which is in a hexagonal mosaic. This is more clearly seen in a tangential section through the foveal cone inner segments in the human retina (Fig. 13b).

Below this central 200 micron diameter central foveal pit, the other layers of the retina are displaced concentrically leaving only the thinnest sheet of retina consisting of the cone cells and some of their cell bodies (right and left sides of Figs. 12a, 12b). This is particularly well seen in optic coherence tomography (OCT) images of the living eye and retina (Fig. 13a, B). Radially distorted but complete layering of the retina then appears gradually along the foveal slope until the rim of the fovea is made up of the displaced second- and third-order neurons related to the central cones. Here the ganglion cells are piled into six layers so making this area, called the foveal rim or parafovea (Polyak, 1941), the thickest portion of the entire retina.

The yellow pigment that forms the macula lutea in the fovea can be clearly demonstrated by viewing a section of the fovea in the microscope with blue light (Fig. 15). The dark pattern in the foveal pit extending out to the edge of the foveal slope is caused by the macular pigment distribution (Snodderly et al., 1984). 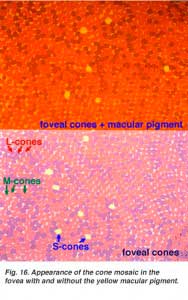 If one were to visualize the foveal photoreceptor mosaic as though the visual pigments in the individual cones were not bleached, one would see the picture shown in Figure 16 (lower frame) (picture from Lall and Cone, 1996). The short-wavelength sensitive cones on the foveal slope look pale yellow green, the middle wavelength cones, pink and the long wavelength sensitive cones, purple. If we now add the effect of the yellow screening pigment of the macula lutea we see the appearance of the cone mosaic in Figure 16 (upper frame). The macula lutea helps enhance achromatic resolution of the foveal cones and blocks out harmful UV light irradiation (Fig. 16 from Abner Lall and Richard Cone, unpublished data). 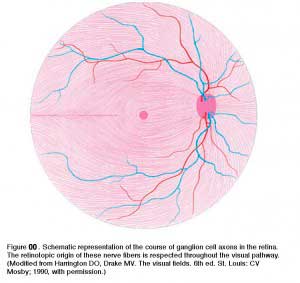 7. Blood supply to the retina 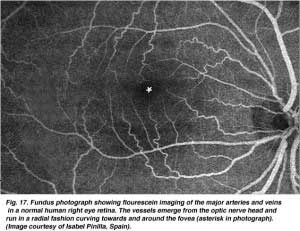 The arterial intraretinal branches then supply three layers of capillary networks i.e. 1) the radial peripapillary capillaries (RPCs) and 2) an inner and 3) an outer layer of capillaries (Fig. 18a). The precapillary venules drain into venules and through the corresponding venous system to the central retinal vein (Fig. 18b).

As will be noticed from the flourescein angiography of Figure 17, there as a ring of blood vessels in the macular area around a blood vessel- and capillary-free zone 450-600 um in diameter, denoting the fovea. The macular vessels arise from branches of the superior temporal and inferotemporal arteries. At the border of the avascular zone the capillaries become two layered and finally join as a single layered ring. The collecting venules are more deep (posterior) to the arterioles and drain blood flow back into the main veins (Fig. 19, from Zhang, 1974). In the rhesus monkey this perimacular ring and blood vessel free fovea is clearly seen in the beautiful drawings made by Max Snodderly’s group (Fig. 20, Sodderly et al., 1992.)

The choroidal arteries arise from long and short posterior ciliary arteries and branches of Zinn’s circle (around the optic disc). Each of the posterior ciliary arteries break up into fan-shaped lobules of capillaries that supply localized regions of the choroid (Hayreh, 1975). The macular area of the choroidal vessels are not specialized like the retinal blood supply is (Zhang, 1994). The arteries pierce the sclera around the optic nerve and fan out to form the three vascular layers in the choroid: outer (most scleral), medial and inner (nearest Bruchs membrane of the pigment epithelium) layers of blood vessels. This is clearly shown in the corrosion cast of a cut face of the human choroid in Figure 21a (Zhang, 1974). The corresponding venous lobules drain into the venules and veins that run anterior towards the equator of the eyeball to enter the vortex veins (Fig. 21b). One or two vortex veins drain each of the 4 quadrants of the eyeball. The vortex veins penetrate the sclera and merge into the ophthalmic vein as shown in the corrosion cast of Figure 21b (Zhang. 1994).

8. Degenerative diseases of the human retina

The human retina is a delicate organization of neurons, glia and nourishing blood vessels. In some eye diseases, the retina becomes damaged or compromised, and degenerative changes set in that eventally lead to serious damage to the nerve cells that carry the vital mesages about the visual image to the brain. We indicate four different conditions where the retina is diseased and blindness may be the end result. Much more information concerning pathology of the whole eye and retina can be found in a website made by eye pathologist Dr. Nick Mamalis, Moran Eye Center. Click on http://insight.med.utah.edu/opatharch/, for further information.

Age related macular degeneration is a common retinal problem of the aging eye and a leading cause of blindness in the world. The macular area and fovea become compromised due to the pigment epithelium behind the retina degenerating and forming drusen (white spots, Fig. 22) and allowing leakage of fluid behind the fovea. The cones of the fovea die causing central visual loss so we cannot read or see fine detail.

Glaucoma (Fig. 23) is also a common problem in aging, where the pressure within the eye becomes elevated. The pressure rises because the anterior chamber of the eye cannot exchange fluid properly by the normal aqueous outflow methods. The pressure within the vitreous chamber rises and compromises the blood vessels of the optic nerve head and eventually the axons of the ganglion cells so that these vital cells die. Treatment to reduce the intraocular pressure is essential in glaucoma.

Retinits pigmentosa (Fig. 24) is a nasty hereditary disease of the retina for which there is no cure at present. It comes in many forms and consists of large numbers of genetic mutations presently being analysed. Most of the faulty genes that have been discoverd concern the rod photoreceptors. The rods of the peripheral retina begin to degenerate in early stages of the disease. Patients become night blind gradually as more and more of the peripheral retina (where the rods reside) becomes damaged. Eventally patients are reduced to tunnel vision with only the fovea spared the disease process. Characteristic pathology is the occurence of black pigment in the peripheral retina and thinned blood vessels at the optic nerve head (Fig. 24).

Diabetic retinopathy is a side effect of diabetes that affects the retina and can cause blindness (Fig. 25). The vital nourishing blood vessels of the eye become compromised, distorted and multiply in uncontrollable ways. Laser treatment for stopping blood vessel proliferation and leakage of fluid into the retina, is the commonest treatment at present.