Three basic types of glial cell are found in the human retina, Muller cells, astroglia and microglia. All were described for the retina by Cajal more than one hundred years ago (1892).

Muller cells are the principal glial cell of the retina. They form architectural support structures stretching radially across the thickness of the retina and are the limits of the retina at the outer and inner limiting membrane respectively. A complete understanding of the shape of a Muller cell is best seen after Golgi staining as shown originally by Cajal (1892) below. 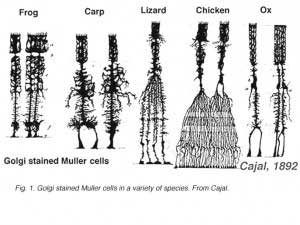 A single progenitor cell gives rise to both Muller cells and retinal neurons(Turner and Cepko, 1987) although apparently in two phases. The earliest phase neurons born at the apical margin of the neuroepithelium adjacent to the pigment epithelium produces primary neurons consisting of cone cells, horizontal cells and ganglion cells (Fig. 2, right). The second phase of cells also born at the apical margins produces Muller cells and rod photoreceptors, bipolar cells and amacrine cells (Reichenbach and Robinson, 1995) (Fig. 2, left). All the developing neurons and the Muller cells have to migrate inward to their final position and it is thought that the Muller cell processes and trunks guide much of the neuron migrations and direct the neurite differentiations. 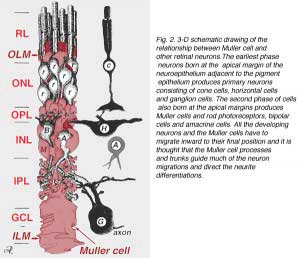 Muller cells contain glycogen, mitochondria and intermediate filaments which are immunoreative for vimentin and to some extent to glial fibrillary acidicprotein (GFAP). The latter filaments are normally in the inner half of the retinal Muller cells and their endfeet (Fig. 3, left), but following trauma to the retina such as retinal detachment, both vimentin and GFAP are massively upregulated and found throughout the cell (Fig. 3, right) (Guerin et al., 1990; Fisher and Lewis, 1995). 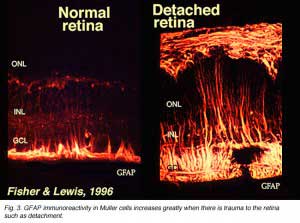 Muller cells have a range of functions all of which are vital to the health of the retinal neurons. Muller cells function in a symbiotic relationship with the neurons (for an excellent review see Reichenbach and Robinson, 1995). Thus Muller cell functions include: 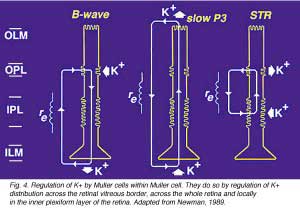 Astrocytes are not glial cells of the retinal neuroepithelium but enter the developing retina from the brain along the developing optic nerve (Stone and Dreher, 1987; Chan-Ling 1994). They have a characterisic morphology of a flattened cell body and a fibrous series of radiating processes. Intermediate filaments fill their processes and thus they stain dramatically with antibodies against GFAP (Schnitzer, 1988). Astrocyte cell bodies and processes are almost entirely restricted to the nerve fiber layer of the retina. Their morphology changes from the periphery to the optic nerve head: from a symmetrical stellate form in peripheral retina (Figs. 5a and b) (Schitzer, 1988) to extremely elongated near the optic nerve (Fig. 6 and 7).

In immunocytochemical staining (Fig. 5b) and in HRP intracellular injections (Fig. 7) stained astrocytes clearly exhibit processes aligned along the ganglion cell axons coursing through the nerve fibre layer. In distribution, astrocytes reach their peak on the optic nerve head and have a fairly uniform decline in density in radiating rings from the nerve head. They are not present in the avascular fovea or ora serrata.

Thick and thin astrocytes have been distinguished on the basis of staining with antibodies to GFAP (Trevino et al., 1996). Thus astrocytes are arranged over the surface of the ganglion cell axon bundles as they course into the optic nerve head forming a tube through which the axons run (Fig. 8). Gap junctions and zonula adherens junctions have been described between astrocytic processes in cat retina (Höllander et al., 1991). 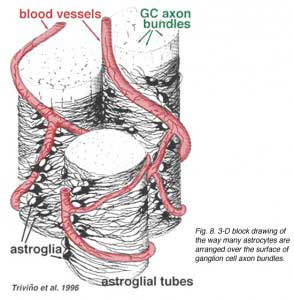 The blood vessels running in and among the ganglion cell bundles are also covered by by both processes and even an occasional cell body of an astrocyte. The function of astrocytes enveloping ganglion cell axons and the relationship to blood vessels of the nerve fibre layer suggests they are axonal and vascular glial sheaths and part of a blood-brain barrier. Similar to Muller cells, they are known to contain abundant glycogen and they may form a nutritive service in providing glucose to the neurons. In addition they probably serve a role in ionic homeostasis in regulating extracellular potassium levels and metabolism of neurotransmitters like GABA.

The third glial cell type is supposedly of mesodermal origin and thus, strictly speaking are not neuroglial as are the astrocytes and Muller cells. They enter the retina coincident with the mesenchymal precursors of retinal blood vessels in development (Chan-Ling, 1994). Microglial cells are ubiquitous in the human retina being found in every layer of the retina.

In Golgi-stained retina they look like strange, multipolar forms with small cell bodies and irregular short processes. In fact, in Golgi preparations they have sometimes been mistaken for nerve cells particularly when they lie in a nuclear layer with a single orientation of their processes in the plexiform layer. 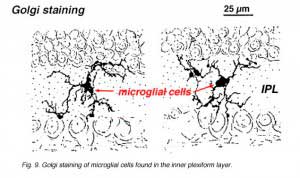 Microglial cells may be of two types. One form is thought to enter the retina at early stages of development from the optic nerve mesenchyme and lie dormant in the retinal layers for much of the life of the retina. The other form of microglia appear to be blood-borne cells, possible originating from vessel pericytes (Boycott and Hopkins, 1981; Gallego, 1986). Both types can be stimulated into a macrophagic function after trauma to the retina, and then they engage in phagocytosis of degenerating retinal neurons.