At every level of the retina there are reciprocal or feed-back loops in the circuitry so that certain neurons can interact laterally within the same layer, vertically from one layer to the other and indeed from the brain to the retina. The intra-layer feed-back loops are typically provided by neurons that use inhibitory neurotransmitters such as GABA, and have a function in sharpening the image by adding lateral inhibition or antagonism to receptive fields of the neurons, while the feed-back loops between the layers or from the brain are less clear in function. The latter loops tend to use neuromodulators as their transmitters and thereby have a more generalized effect on groups of neurons, or on the state of excitability of the neuron chains (adaptation for example).

2. Feedback in the outer retina

As mentioned in previous chapters, it has been well demonstrated in turtle and fish retinas that cones receive an antagonistic reciprocal feed-back message from horizontal cells (Baylor et al., 1971), which serves to provide a restricted concentric receptive field for the individual cones. Evidence for feed-back synapses have been difficult to demonstrate either electrophysiologically or morphologically in the cones of the mammalian retinas. However, the rod axon terminals of HI horizontal cells ending in the rod spherules are seen to make small punctate chemical synapses, consisting a small cluster of vesicles at a single dense projection in the membrane, upon both the rod spherule (Fig. 2 and 3) and upon the rod bipolar cell dendrite (not illustrated) in human retina (Linberg and Fisher, 1988). A similar appearing small cluster of vesicles is occasionally seen in horizontal cell dendrites in the cone pedicle triads in human retina too (Fig. 1 and 3). 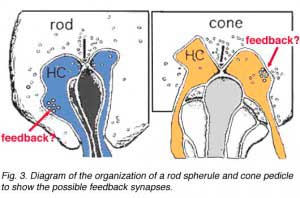 In the inner plexiform layer, many amacrine cell types probably provide feed-back information to bipolar axon terminals. One we known something about is the reciprocal synapses from the wide-field rod amacrine A17 upon the rod bipolar axon terminal (Fig. 4). It is intriguing that this IPL input/output synaptology between the rod bipolar and A17 amacrine parallels the input/output of the photoreceptor and horizontal cell at the OPL and suggests some necessity of the rod system, in the mammalian retina at least, to be in repetitive feed-back loops all through the retina. 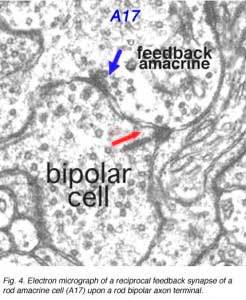 It is possible that feed-back (reciprocal) synapses, in these cases, are involved with phasic or transient components of these cell response characteristics. They may sharpen and speed up otherwise slow potential responses of the bipolar cell by feed-back to the bipolar before output to the ganglion cell.

A neuron in the retina of just about every species studied, including man, links the two plexiform layers by receiving synaptic input in the IPL and having synaptic output upon neurons of the OPL. It is known as the interplexiform cell, an IPC. The interplexiform cell, first described by Gallego (1971) in the cat retina has been extensively studied in the goldfish retina by Dowling and coauthors (Dowling and Ehinger, 1975) and now also in the cat and the human retinas (Fig. 6) (Kolb and West, 1977; Linberg and Fisher, 1986; Kolb et al., 1992). In cat and human retinas such interplexiform, cells are medium field and tri-stratified in branching pattern in the inner plexiform layer. Either from the cell body or from one of the dendrites in stratum 1 of the IPL, processes ascend through the inner nuclear layer to the outer plexiform layer. There they run for a short distance (Figs. 6 and 7).

Electron microscopy has been performed on examples of this type of IPC in cat and human retinas. They prove to get input from amacrine cells of unknown type and to make some synapses upon rod and cone bipolar axons (Kolb and West 1977; Nakamura et al., 1980) with their inner plexiform layer branches. Through the inner nuclear layer and into the outer plexiform layer, processes of IPCs cell make numerous conventional synapses upon rod and cone bipolar cell bodies and apical dendrites (Fig. 8). Figure 9 is a reconstruction of an interplexiform cell in human retina made from serial EM images, and summarizes the connectivity of these cell types (Kolb and West, 1977). 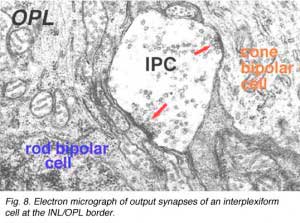 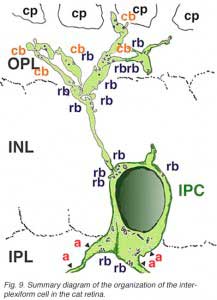 In both human and cat retinas there exists a dopaminergic amacrine cell, called A18 (Fig. 10) which we think is involved in the rod system pathways of the IPL and particularly with the rod amacrine AII cells (see previous chapters). They are large cell bodied amacrine cells wwith long multibranched dendrites restricted mainly to a plexus in stratum 1 of the IPL, below the amacrine cell bodies (Fig. 10). However, sometimes these A18 cells can be seen to have processes ascending from their cell bodies or from their plexus of dendrites in stratum 1 of the inner plexiform layer, to pass up to the outer plexiform layer. In these layers dopaminergic processes may be presynaptic to horizontal cells in the human retina (Frederick et al., 1982). In the cat retina, however, we have seen these ascending dopaminergic processes (marked by their content of Toh immunoreactivity) to be presynaptic (Fig. 11) to the conventional gabaergic IPC, i.e. the cell described above (Kolb et al., 1990, 1991). Recent evidence suggests that dopaminergic cells in mammalian retinas are pre- and postsynaptic to the melanopsin containing M1 ganglion cell in the retina (Vuglar et al., 2007; Zhang et al., 2008; McMahon et al., 2010). Thus the dopaminergic amacrine may be receiving centrifugal input from the suprachiasmatic nucleus (SCN) in the brain where circadian rythms are initiated from melanopsin containing ganglion cells. (See the chapter on melanopsin ganglion cells). The dopamine cell in retina seems to be involved in feed-back loops from the SCN (through melanopsin cells) and within the retina modulating AII amacrine cell gap junctions, and from inner plexiform layer to outer plexiform layer influencing gap junctions between horizontal cells and even between photoreceptors.

Centrifugal fibres arising in brain nuclei and passing back to the retina have been noted sporadically in mammals but with few details and little knowledge about which brain centers they might derive from. Centrifugal fibers are particularly well developed in the avian retina (Cajal, 1892; Maturana and Frenck, 1965; Ogden, 1968). A few centrifugal fibres were described in the monkey retina by Polyak (1941) and later by Honrubia and Elliot (1970). According to Polyak (1941) the centrifugal fibres in monkey have varicose, bulbous terminals that end in the inner plexiform layer close to amacrine cell bodies. In the human retina they have been followed across the nerve fiber layer into the inner nuclear layer before disappearing (Honrubia and Elliot, 1968) (see below).

Recently, it has been discovered that centrifugal axons arising in the hypothalamus project to various parts of the brain including the retina in the macaque monkey. Interestingly these axons contain histamine (Gastinger et al., 1999). The histamine-immunoreactive axons run from the optic nerve head in a broad circular band around the far side of the fovea in temporal retina and appear to return to the optic disc (see Figure 13). Many of these axons branch extensively and emerge out of the nerve fiber layer into the inner plexiform layer. Sometimes the histaminergic axons are associated with retinal blood vessels. It will be extremely interesting to discover for sure whether these histamine containing centrifugal fibers have interactions with the dopamine amacrines or other cells of the retina as is proposed for centrifugal fibers in other species. There is very recent evidence that dopaminergic amacrines in mouse retina are responsive to signaling through H1 histamine receptors (Frazao et al., 2011).

In the fish retina we know that centrifugal fibres use the hormones FMRFamide and luteinizing hormone-releasing hormone as neurotransmitters (Stell, 1985). They synapse in the fish directly upon cell bodies of the dopamine interplexiform cell (Zucker and Dowling, 1987). In turtle retina only 3 -6 efferent fibers that are immunoreactive to the peptide met-enkephalin are known to enter the retina and pass up to the amacrine cell area. These fibers originate in the caudal mesencephalon but their function and action in the retina are still unknown (Weiler, 1985).