The ability to detect moving objects in the visual scene is fundamental to our daily survival. It originates within the sensory organ, the retina, where a significant proportion of retinal ganglion cell (RGC) responses is dedicated to detecting motion in different directions (Fig.1). 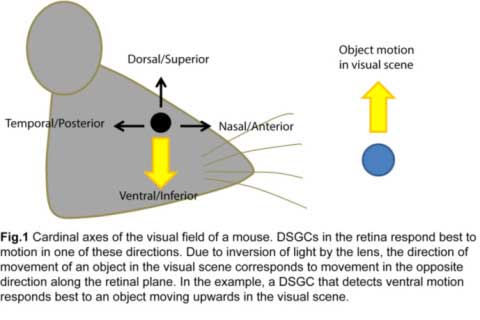 The first evidence for such retinal computation was established in the rabbit retina by Barlow and colleagues in the 1960s. By moving small spots of light across parts of the receptive field of a direction-selective RGC (DSGC), they showed that a moving stimulus can elicit strong spiking of action potentials in one direction (henceforth referred to as the preferred direction) but not in the opposite, or null, direction (Fig.2) (Barlow and Levick, 1965). 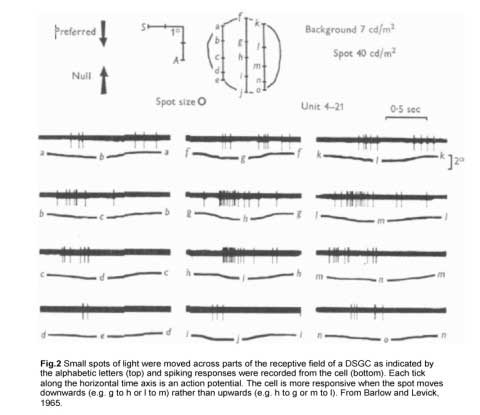 In fact, there are different types of DSGCs and they can be segregated based on two criteria. First, they either respond to both light onset and offset (ON-OFF), or just to the former (ON). Second, they prefer different directions of motion. These functional characteristics give rise to four types of ON-OFF DSGCs and three types of ON DSGCs. The ON-OFF DSGCs (ooDSGCs) each detect motion in one of four cardinal axes while the ON DSGCs detect movement in the dorsal, ventral and nasal directions (Oyster and Barlow, 1967) (Fig.3). 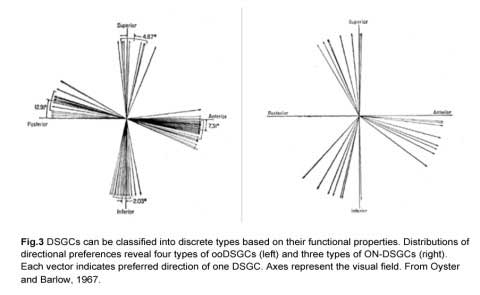 Since then, advances in mouse genetics has enabled the study of analogous DSGC populations in the mouse retina, and also led to the discovery of an OFF DSGC type that detects upward motion in the visual scene (Kim et al., 2008). These new tools complement existing technologies like electron microscopy and dye-filling techniques by allowing specific types of RGCs to be genetically labeled and manipulated. This facilitates the search for morphological correlates of their physiological function. In the following segments, I shall describe the morphology and physiological properties that underlie the direction-selective responses of each DSGC type.

ooDSGCs are the most extensively studied population of direction-selective RGCs, in part due to their more frequent occurrence. They have bistratified dendrites, laminating in both the ON and OFF sublaminae of the inner plexiform layer (IPL) within the retina (Fig.4) (Kay et al., 2011). Within each sublamina, the dendrites co-laminate with those of interneurons, namely glutamatergic bipolar cells that provide the main source of excitatory input, and starburst amacrine cells (SAC) which provide largely inhibitory input. 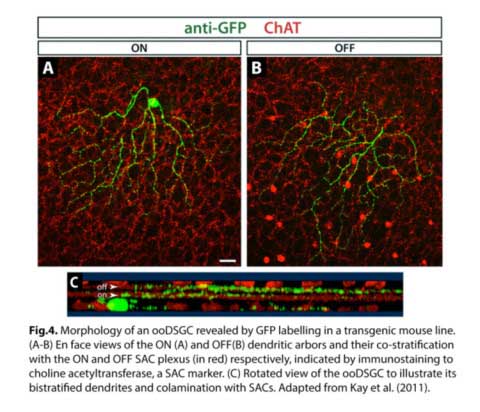 A stimulus entering the receptive field of an ooDSGC in its preferred direction will elicit the most robust action potential spiking and little or no response in the null direction (Fig.5) (Trenholm et al., 2011). This directional preference persists regardless of changes in the size, shape, contrast or trajectory of the moving stimulus (Barlow and Levick, 1965). 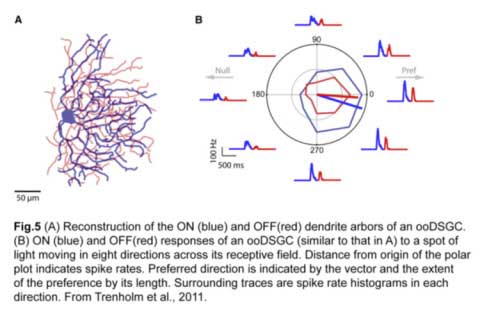 Mechanisms of direction selectivity in ooDSGCs

There are three possible mechanisms by which direction-selective responses in ooDSGCs can be generated. Interaction with their presynaptic interneurons can produce stronger excitation in the preferred direction or stronger inhibition in the null direction. Postsynaptic integration of excitation and inhibition within the ooDSGC can also give rise to robust response in the preferred but not the null direction. In order to address these possibilities, an understanding of the components of the direction-selective circuit is first needed. 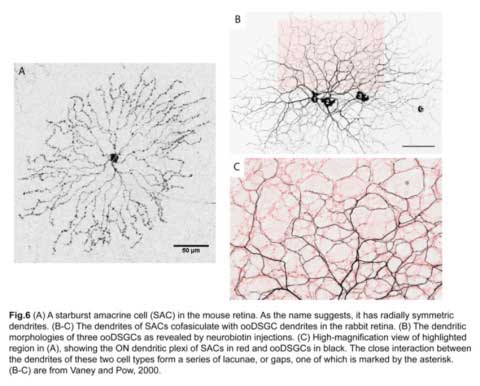 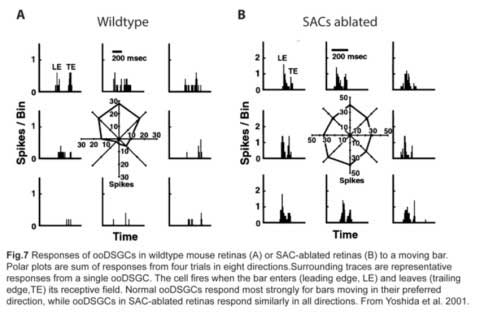 In fact, SACs are a key source of inhibitory input for ooDSGCs (Fried et al., 2002). Using paired patch-clamp recordings, it was shown that depolarizing a SAC located on the null side of an ooDSGC elicits inhibition in that ganglion cell (fig.8). On the other hand, SACs on the preferred side contribute relatively little inhibition. 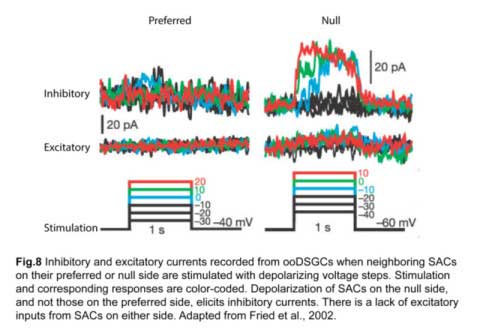 How is this asymmetric wiring between SACs and ooDSGCs established? Direction selectivity is present before eye opening at two postnatal weeks, so visual experience does not seem to be necessary for establishing the circuit (Chan and Chiao 2008). A clue came from performing paired recordings of SACs and ooDSGCs in transgenic mice over postnatal development (Wei et al., 2011). SAC-ooDSGC connections on both the null and preferred sides of the ooDSGC are of equal strength during the first postnatal week, but only those made by null-side SACs strengthen significantly over the second postnatal week. Such developmental sculpting gives rise to a circuit where inhibitory currents from null-side SACs are larger while excitatory currents from SACs on either side are similar (fig.9). 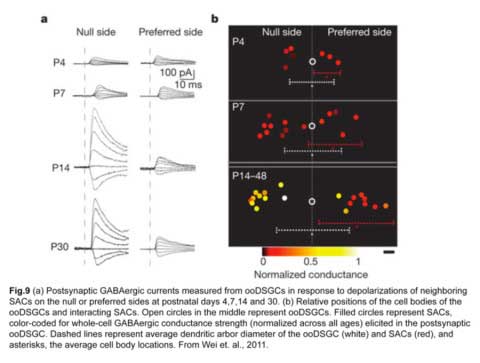 Structural basis for the asymmetric inhibitory SAC input onto ooDSGCs

A landmark experiment by Briggman and colleagues (Briggman et al., 2011) provided a structural basis for this functional asymmetry. By correlating physiological responses of each ooDSGC with structural evidence, from serial block-face electron microscopy, of putative synapses on these same cells, they showed that the SACs on the null side of ooDSGCs make more inhibitory synapses onto ooDSGC dendrites compared to SACs on the preferred side. In particular, individual SAC dendrites that are oriented antiparallel to the null direction of the ooDSGC contribute to the majority of these inhibitory synapses (fig.10). Hence, an increase in the number of SAC-ooDSGC inhibitory synapses, rather than the strength of individual ones, accounts for the direction-selective responses of ooDSGCs. 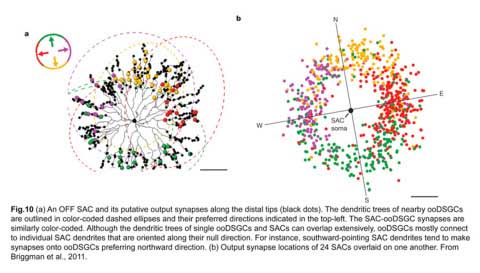 Each SAC can wire to multiple ooDSGCs and contribute to their direction-selective responses. This is possible because each SAC dendrite is an independent direction-selective unit (Euler et al., 2002) (fig.11). When a stimulus is presented in a centrifugal direction, moving from its cell body out to the distal tips, the SAC dendrite inhibits the ooDSGC that it connects to. Therefore, each SAC dendrite responds best to motion in the opposite direction relative to that preferred by its postsynaptic ooDSGC (fig.12). 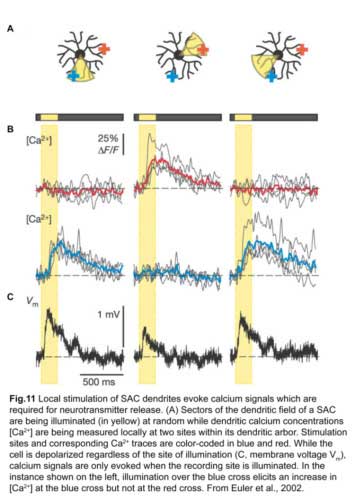 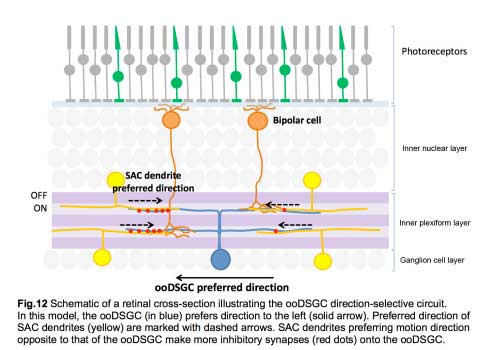 Response properties of ON DSGCs

A separate class of directive-selective RGCs responds only to light increments. Called ON DSGCs, they detect stimuli moving in one of three directions: dorsal, ventral and nasal, with a slight offset from the horizontal and vertical axes (fig.2) (Barlow and Levick, 1965; Sun et al., 2006; Yonehara et al., 2009). Each direction is encoded by two types of ON DSGCs with different response properties: one has sustained spike responses while the other has transient responses (fig.13). 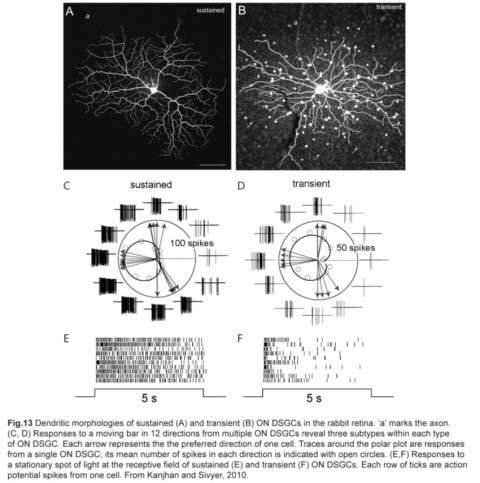 As their functional properties suggest, ON DSGC dendrites ramify in just the ON sublamina within the IPL, co-stratifying with the dendritic plexus of ON SACs (Fig.14). Occasional processes to the OFF sublamina have been observed (Sun et al., 2006; Dhande et al., 2013). However, the morphologies of sustained and transient ON DSGCs differ in various aspects. First, sustained ON DSGCs have more terminal dendrites arising perpendicularly from their parent dendrites. Second, transient ON DSGCs show tracer coupling to non-SAC amacrine cells while sustained ones do not (Kanjhan and Sivyer, 2010; Hoshi et al., 2011). 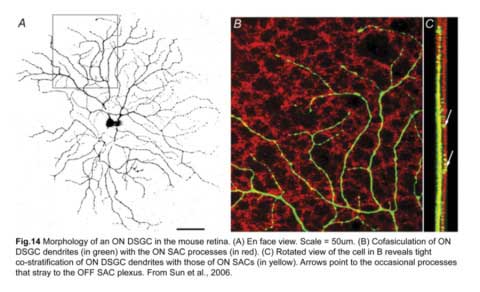 Mechanism of direction selectivity in ON DSGCs

The direction-selective responses of ON DSGCs, just like their bistratified counterparts, are generated by asymmetric inhibition from ON SACs on their null side. This was shown by expressing channelrhodopsin in SACs, photostimulating them, and recording responses from their postsynaptic, ON DSGCs (Yonehara et al., 2011). Stimulating null-side SACs elicited more inhibitory currents than those on the preferred side while cholinergic input was symmetric throughout. Glutamatergic input from ON bipolar cells are not direction-selective either (Yonehara et al., 2013). ON-DSGCs, however, respond better to slower stimuli compared to ooDSGCs (Sivyer et al. 2010).

The latest DSGC type to be discovered is an OFF DSGC in the mouse retina (Kim et al., 2008). Called J-RGCs for their enriched expression of junctional adhesion molecule B (JAM-B), they have remarkably asymmetric dendrites that point ventrally and laminate within the outermost sublamina of the IPL (fig.15).

These ventrally asymmetric J-RGCs respond to upward motion in the visual scene. Interestingly, a small fraction of J-RGCs residing in the most dorsal and ventral parts of the retina have symmetric dendritic arbors and are not direction-selective (Fig.16) (Kim et al., 2008; Kim et al., 2010). Such remarkable correlation between the dendritic structure and their direction-selective responses is unprecedented. 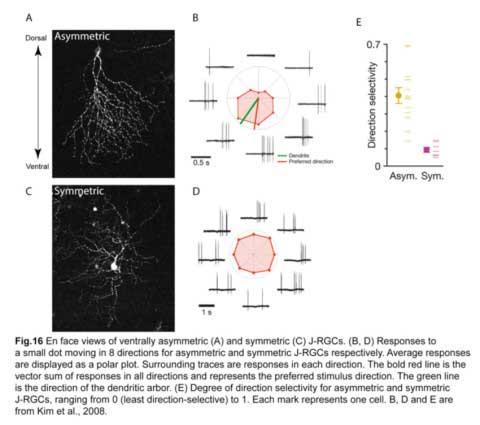 The mechanism by which J-RGCs generate their direction selectivity remains unclear. It is probably very different from the SAC-mediated circuit that the ooDSGCs and ON DSGCs utilize since J-RGCs do not co-laminate with SACs. Finding out the interneuron types that interact with J-RGC dendrites will be a key step towards elucidating its direction-selective circuit.

The DSGCs covered above make up most of the direction-selective ganglion cell types but are, by no means, exhaustive. With more extensive functional analyses, additional DSGC types may be revealed (Helmstaedter et al., 2013). Further structural analysis at both the dendritic and synaptic level will also shed light on the precise mechanisms that create direction-selectivity. It will be equally intriguing to understand how these direction-selective computations from the retina are integrated at higher brain centers.

7          Vaney, D. I. & Pow, D. V. The dendritic architecture of the cholinergic plexus in the rabbit retina: Selective labeling by glycine accumulation in the presence of sarcosine. The Journal of Comparative Neurology 421, 1-13 (2000). 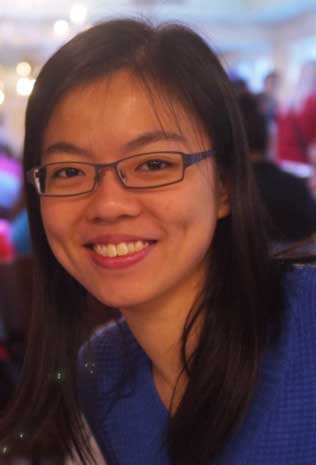 Jinyue Liu Grew up in Singapore and ventured to the University of Cambridge, UK, for her Bachelors degree (BA hons) in natural sciences. She was supported by a National Science Scholarship from the Agency for Science and Technology and Research (A*STAR, Singapore). At Cambridge, Jin worked with Prof. William Harris on the role of metabolism in the differentiation of retinal progenitor cells.  She is currently a PhD candidate at Harvard and is engaged in research to understand the mechanisms underlying development and circuitry of retinal ganglion cells, in Josh Sanes’ lab. Email address: jinyueliu@fas.harvard.edu